I Would Have Rather Sat In Someone Else’s Urine

I go to the restroom more often than I should. Sometimes I take my time while I take care of business and other times my bladder is on the verge of bursting so I run in… sit… breath… and exhale.  Those are the times that you gross out because the person that was there before you never learned to pee correctly and peed on the seat. Or the previous person must have forgotten how to wipe because they tinkle on the seat.  Yeah GROSS! Sitting on someone else’s pee is super annoying & disgusting. Well, luckily that was not what happened to me… THIS TIME.

So I was busy at work and didn’t take time for a pee break because I wanted to finish the task I was on. Not because I’m a workaholic because I’m far from that, but because when I finally decided to go to the restroom it was almost too late.  I literally ran to the restroom with my pants already unbuttoned and ready to squat before getting to my destination because my bladder was about to burst. Well I guarantee that I would have rather sat in someone else’s urine than what happened.   I will say, that I am super grateful that I didn’t take the time to poop because as I stood up I freaked out and nearly had a panic attack…. I screamed and just about passed out. So little known fact about me; I have a phobia of roaches. There was a HUGE roach in the toilet that I had just sat on.  Aagghhh!! Holy CURSE WORD!  My perception of that roach was that it was the size of King Kong. Way super freaky! My heart beat three times faster than normal for a while. Just the thought of it made me queasy. BLAH!  It was NOT one but funny at the time but now I sort of, kind of chuckle… but still get the Hibi Gibbies at the thought. Ha

Then of course I had a flashback of when I was a kid. I remember being 10-years-old and being super afraid to use the toilet because my mom had told me that King Kong was going to stick his hand up the toilet and grab my butt. Ha… Yeah, funny now, but not back then. 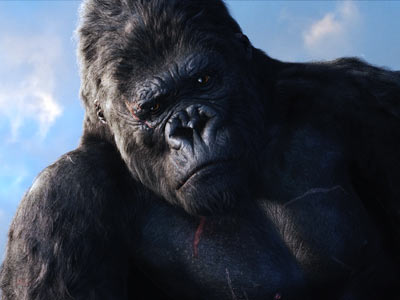 Am I the only one that sees King Kong and the roach the same size?

Now I have to worry about roaches crawling up my hind-side! Ugh! Creepy! You know, I think my mom hates me. Ha ha… as I was telling her my roach horror story; without a beat she said, “I’m sure you probably pooped it out” haha…

And of course I’m traumatized because now before using the restroom, I make sure to flush it first to make sure there are no creepy crawlers in there.

Do you have a bathroom horror story?