Edna Guerrero ER, Fall, I've Fallen and I Can't Get Up 17 Comments

Saturday, October 11th (my not so yay day) : Today was the big yard sale day. What fun… NOT really. My day started with me getting up too early for my own good. I woke up at 4:45 am to set things up for my yard sale. I figured that I would set things up then go shower. Well… little did I know that I would get my first “customer” at 5:30 am.  Ande, Jill and my mom started helping out closer to 6 am. By that time, the sun was starting to come out and more people were showing up and I couldn’t go shower so I figured “Oh well, I will do it after the yard sale”. So once the yard sale was over which was about 1:00 pm we posted a notice on Craigslist for anyone to get free left overs from the yard sale. About 90% of what was left from the yard sale  was taken. Yippee for less clean up for me.

So… I went upstairs to shower and realized that I had a black garbage bag of Jessica’s old clothes that I had forgotten to put out for the yard sale. So as I was carrying it down stairs I drop the bag and it rolled half ways down the stairs because it was too dang heavy. So instead of carrying the bag I decided to walk in front of the bag and drag it behind me. Well… I took 2 steps and the bag started sliding and I couldn’t stop the bag so the bag rolled down stairs with me in front of it. I fell several steps landing on my ankle at the bottom of the steps. It hurt so bad that I just rolled around on the floor screaming, “it hurts, it hurts”. My ankle immediately swelled up which menat I had to make a trip to the ER. I of course do not like Dr’s because they always tell you something is wrong. HA.  So I tried to stop screaming and crying and lie about the pain was going away and saying I could move my toes and that it was just a sprain and that if I just wrapped it, I would be okay. Well, he didn’t fall for that. It could be because I was lying and I really wasn’t able to move my toes, a part of my foo 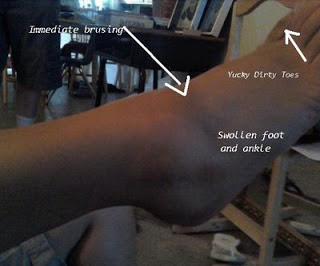 t was numb and it hurt super duper bad. I wanted to shower first because I had been having a yard sale and was dirty… but I unfortunately wasn’t able to shower before going the the ER. So in the mists of me crying in pain, Ande is giving me a baby wipe bath.  I had not bathed today and I was out in the sun all day dealing with my yard sale. I was way to dirty to go anywhere.

Anyhow, so as I am lying on the floor – in between screams and the crying, I tell Ande to take a picture of my ankle. I wanted to see it because my family would look at it and say, “Whoa, that looks bad” But we all know the real reason for me wanting a picture… for my blog. ha ha.  I could have hopped to the car, but I realized that I was like a beached whale and wasn’t able to move.  My niece Jill laughed at me because she said even when I am in pain and hurt I still had a sense of humor.

So after 4 hours in the ER we found out that I did not break my ankle… thank goodness! I did however severely sprain it, with a torn ligament. The pain was ex 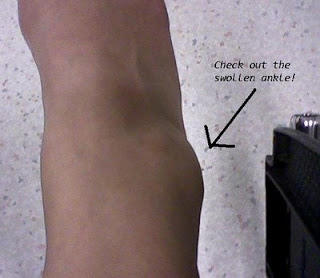 cruciating. I would rather be in labor because at least then the pain comes and goes with the contractions and with my ankle it was constant non stop pain. ha ha. So now I have to wear an air cast, I’m on crutches and I have to keep my foot elevated. The Dr gave me two pills and told me to take them. He said one was for the swelling and the other for the pain. I took them and soon after I started feeling tired and light headed. I got chips and peanuts from the vending machine. When we got released we went to Walgreen’s to fill the prescriptions but of course, Walgreen’s pharmacy closed at 6 pm. grrrr… I felt super sick to my stomach and felt like I was going to vomit and pass out. So I stopped at KFC to get food. While I was in the car, I couldn’t hold it in any longer so I opened the car door and puked. It was gross but surprisingly smelled just like peanuts. ha ha.. I actually took a picture of my vomit but will spare you and not post it. Gosh, I am so considerate! ha.  Anyhow, we were finally able to fill the prescriptions which I realized then what it was that the DR had given me. Motrin and Vicodin. Now, why the heck wouldn’t the DR give me juice or something to snack on if he gave me Vicodin. Shouldn’t he know that you shouldn’t take that on an empty stomach. grrr.

Anyhow, I finally got home and since I don’t know how to walk with crutches, I tripped and fell walking into the house. Luckily I didn’t hurt my ankle more, but I did land on a box giving myself a bruise on my stomach. Anyhow, I took some more “feel good” drugs. And for some reason they just kick my butt and put me to sleep. So I was out by 8:00 pm.

Anyhow, I am grateful and really appreciate how helpful my familia has been. My mom has come over several times. She is constantly calling to see if I need anything as well as to check on me.  Jill & Ande cooked on Sunday and my every need was attended to.  When Ande and Jill came home from school I decided to roll myself around the kitchen in the computer chair so that I would be able to cook dinner. I didn’t have everything that I needed for dinner so… my dear sweet Ande WALKED to Safeway (about 1 mil one way) to get what I needed. How sweet is that! Oh, and Jill cleaned up the mess from the yard sale. Because I had to go to the ER, I left everything outside. What a sweetheart she is!!