The weather is finally cool enough which means it’s chili making time.  My taste buds are acting up just thinking of the scrumptious taste of good chili.  And because I’m humble (word used loosely)  I won’t mention that my chili is in fact Award Winning Chile. haha. For four years straight I submitted this recipe in a chili cook-off and won first place every time. An ironic thing was one year the prize was a recipe book for CHILI.  ha. It kind of made me chuckle. Why in the world would you give someone that won a Chili cook-off  a recipe book on how to make chili. haha. It still makes me cackle at the thought.

Anyhow, I have kept my chili recipe top-secret for many years… until now. Oh wait… I just had a deceitful flashback. There was once a time when someone asked me a very difficult question {Can I get your recipe?}.  I was stupefied at that simple question. I went blank. I started twitching. I was desperately trying to figure out how I could get out of it. I thought I was going to have a panic attack because I don’t like to say no to people and I REALLY wanted to say no to this nameless person. But y’all can relax because as quickly as I was dumbstruck with that difficult question a light bulb went off. Well it kind of flickered…. in agony.

I remembered an episode from the TV show, Everybody Loves Raymond when Marie left out an ingredient so Debra {her daughter in law} looked like an incompetent cook. I figured if it’s done on TV why not do it in real life.  Yup! I sure did scoop down to that level.  I gave this nameless person the recipe to my award wining chili… BUT I left out my “secret” ingredient.  Yes, I know…. that was deceitful of me, but in my defense, I didn’t want that nameless person to enter MY chili in the chili cook-off so I had no other choice.  Come on, you would’ve done the same thing right? If not, just humor me and say I was in the right! HA!

Now that the recipe is out there for the world to salivate over, I’ll tell you what my secret ingredient was… BACON!!! Yes.. BACON. How in the world can anything taste good without bacon. Oh the other thing I hadn’t told the nameless person was to brown the kielbasa sausage after dicing it. Dang.. I’m on a roll on being deceitful. I wonder if being deceitful are grounds for not going to heaven. Ha!  Yes, I felt a tad bad but I sure didn’t lose any sleep over it and I quickly got over it. ha

So there  you have it….  I now feel a huge burden off my shoulders. Actually, that isn’t true. My stomach is turning with a little guilt of giving you my real recipe or it could be from the tacos I had yesterday.  haha   My award-winning chili is ridiculously easy to make so when you make it, let me know how it turns out. Enjoy! 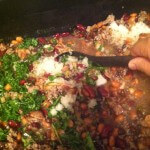 There you have it … you can now enjoy my Award Winning Chili by itself or with cornbread or tortilla chips.  If you’re adventurous you can top it with shredded cheese & sour cream if your little heart desires. 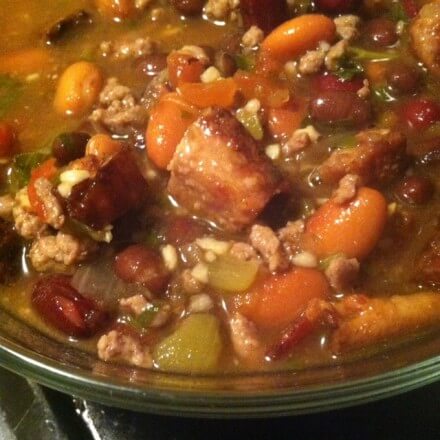 Now I'm off to enjoy my Award Winning Chili