Part 2 of the Shenanigans continue:

Oh Monday morning…. if it wasn’t one thing, it was another.  The outcome of the wheels turning non-stop ALL night resulted in waking up with a horrendous headache. UGH! I wanted to sta in bed and just sleep for the rest of the month. But… of course I couldn’t do that because I had heathen kids that were ready to conquer the day at an amusement park.

As I’m driving to Knotts Berry Farm,  it dawned on me that I had to pay $15 for parking. Oh my gosh!!! I only had $40 for this day. What was I going to do now? That meant I was down to $25 cash for Tuesday’s budgeted money.   Eeekkk!  But don’t fret because all was well. I had taken (more like snuck out) bread from the hotel breakfast room.  Oddly enough, I happened to have single serve peanut butter & jelly… so the kids could have lunch in the amusement park.  Yup! Frugal at it’s best!

We get to Knotts and the ticket taker lady asked my niece how old she was. Her response was, “Oh I’m 12.. I mean, I’m 13 now”. (She had her 13th b-day party 2 days prior). The lady did not let her in because she needed an adult ticket. I was SO confused.  Then it dawned on me that when I bought her ticket, she was actually 12 and it never crossed my mind that she’d be 13 when we got to Knotts. UGH! How in the world was I going to have enough money to pay the difference. After a quick desperate prayer, another worker asked what was happening and I explained. She thanked me for my honesty and let us all in without having to pay the difference. *prayer answered*  But of course, I had to tell my niece… “When we come back tomorrow, you WILL BE 12 years old” otherwise she’d have to stand in a corner holding a sign literally saying, “Will work for food”.

So remember that horrendous headache… well it got worse after the first ride. I guess riding Ghost Rider was not the smartest thing to do.  It was a ridiculously bumpy wooden roller-coaster.  My head was killing me… but I was not about to ruin the kids time. CURSE THOSE HEATHENS!!!!  So we got on 2 more rides and by that point, I felt like I was about to pass out from an insane horrendous headache.

So 1 hour after getting to Knotts, I left the kids in the park and decided to go lay in the car for a bit in hopes that my headache would lessen. As the 3 older kids enjoyed the rides, my lovely 10-year old tagged along with me because she’s a leech and can’t survive without her mother.  After a painful and sweaty and VERY mini and uncomfortable nap, I was back in the park and met up with the other kids. The boys were hungry *shocker* and so they sat and ate peanut butter and jelly sandwiches.   As the boys were eating….   I decided to look through my purse in the slim chance that I’d find some extra hidden money.  Even a couple of dollars would have helped!  Holy heck! It was a miracle… I felt like I hit the jackpot because I happened to find a $20 Sprouts gift card on the bottom of my purse. *prayer answered*. With having that gift card, I felt rich so we decided to walk across the street from Knotts to eat lunch at McDonald’s. Of course they were only allowed to eat from the dollar menu. ha.  All through lunch I felt like I was about to pass out. It hurt to open my eyes…  the light hurt… the sound of laughter, hearing people talk hurt and vomiting due to the pain… CURSE YOU MIGRAINE! I really just wanted to curl up in a ball and roll away down the street hitting every bump and car so I would be knocked out.  But I decided it was best for me to head to the hotel and sleep off my migraine otherwise I probably would have knocked out innocent kids for talking.  Considering Knotts was a ghost town… by lunch time, the kids had already gotten on everything so the girls decided to head back to the hotel with me as the 2 boys stayed at the park. 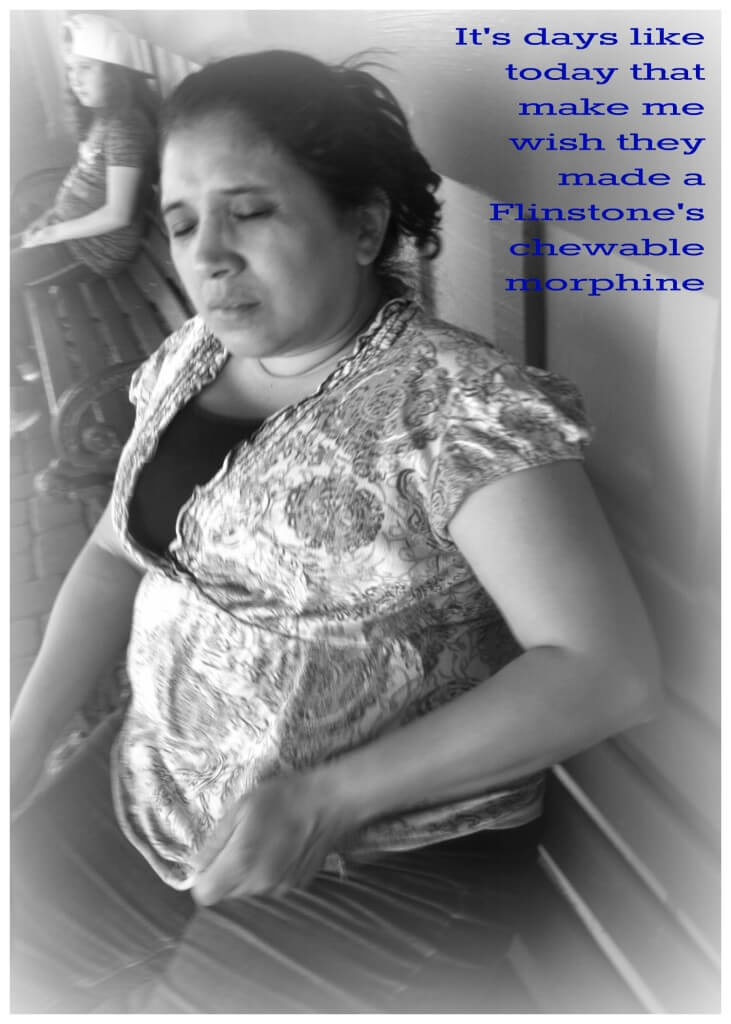 I drove back to the hotel with one eye partially open so I can’t guarantee I didn’t drive anyone off the road. I was so looking forward to laying in a crisply made bed… you know because my bed at home isn’t always made… so I was REALLY looking forward to it.  Remember how I said if it’s not one thing.. it’s another.  Here’s the shenanigans of me trying to sleep.

2:30: Got back to hotel. Housekeeping had not been there. UGH!
2:50: Girls went to the pool.  After drugging up, I laid down & quickly fell asleep
3:15:  Woken up by someone knocking on the door with a sweet voice (that I wanted to strangle for waking me up) saying, “housekeeping”.  I get up… with no time to put on shoes or a bra.
3:20: I reluctantly went to the pool area with the girls still shoe & bra-less (not a pretty sight)
3:25: Laid in the pool area but couldn’t sleep because girls kept splashing water. Those heathens!!!

3:55: Headed back to the room to take a much-needed nap (thankfully housekeeping was out of there)
4:25: Woken up by the phone with my daughter in AZ telling me that Dairy Queen was giving away FREE ice cream cones. Weeeee! Super news as my budget was not going to allow extra “fun”.
4:35: Back to trying to sleep away the headache
4:55: Woken up by my heathen girls knocking on the door. (Why couldn’t they swim for another 2 hours? ha)  But my niece did bring me a rose telling me the rose was to make me feel better. (she pulled the rose out of the hotels garden that said, “do not take roses”) All I could think was… “AGGHH! You heathen child! I’m not gonna get my much needed deposit back”, but instead, I thanked her.
5:00: Luckily I immediately fell right back into a deep sleep
5:30: Woken up AGAIN by the phone ringing. It’s my nephews asking to pick them up from Knotts. UGH!!! Grudgingly I put on a bra to pick up the boys.

I was able to surprise the kids by being the most awesome aunt and take them to Dairy Queen… but I had to make it clear that they could ONLY get a vanilla ice cream cone. (that’s what Dairy Queen was giving away for free). ha. We sat in the parking lot and enjoyed our ice cream..,. well until I sat on dog poop and got bitten by ants… other than that… all was fine. ha.   Did ya know that ice cream tastes so much better when it’s free?  Did y’all take advantage of the free ice cream? 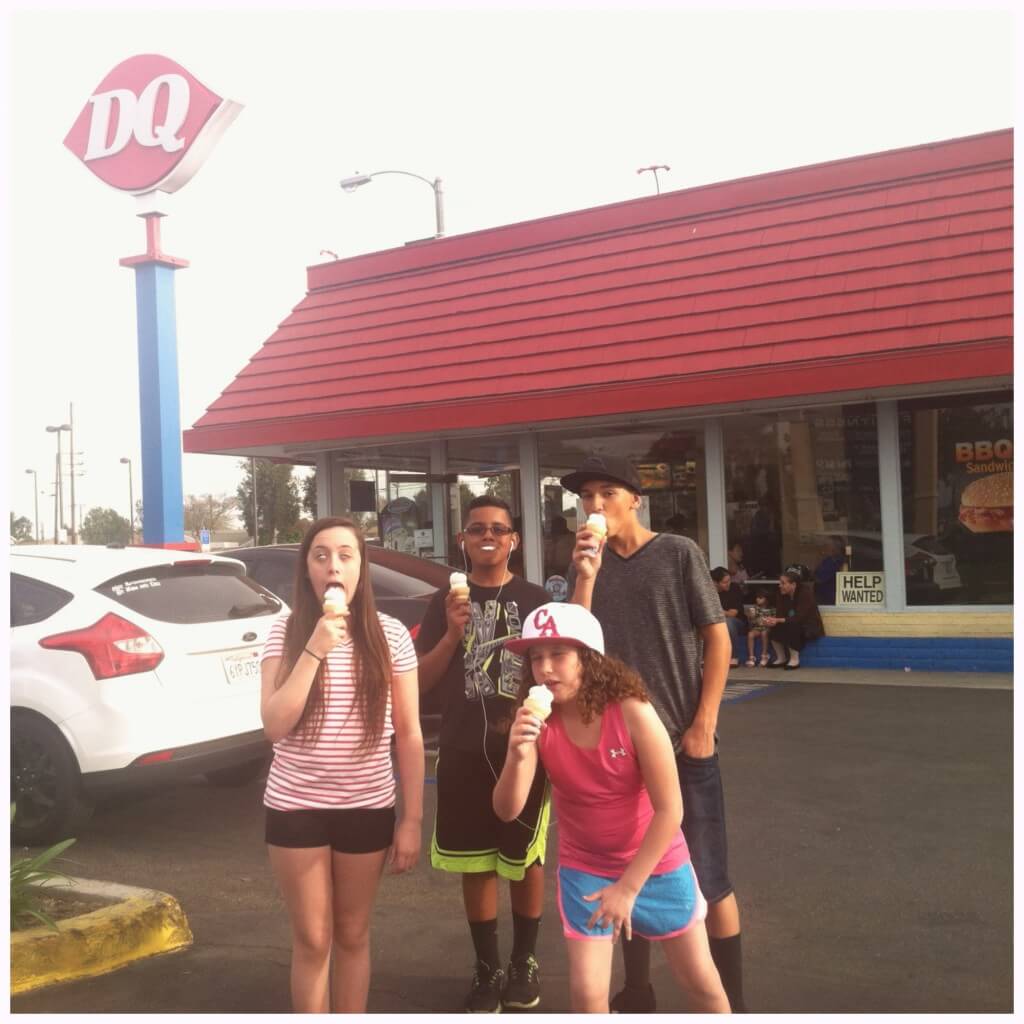 I haven’t figured out if pre-teens and teens are constantly hungry or if they were hungry from the lack of having a decent meal. We went to Sprouts to get dinner but of course got lost on the way. I would’ve had better luck having a blind person read MapQuest than a teen navigate. Have you ever been to Sprouts? Holy heck everything was expensive. YIKES!  We walked around for A LONG time trying to figure out what we should have for dinner.  I apologized profusely to the kids and said all we could afford were the frozen burritos. Those suckers were $4 each. YIKES!  We were lucky enough to have appetizers before our dreaded burrito dinner, thanks to the samples. The ghetto cheapskate in me kicked in because I made sure these kids ate as much as possible of the samples. I may or may not have eaten the majority of the scrumptious FREE cheese as the kids ate MANY pretzels and some fancy bread. 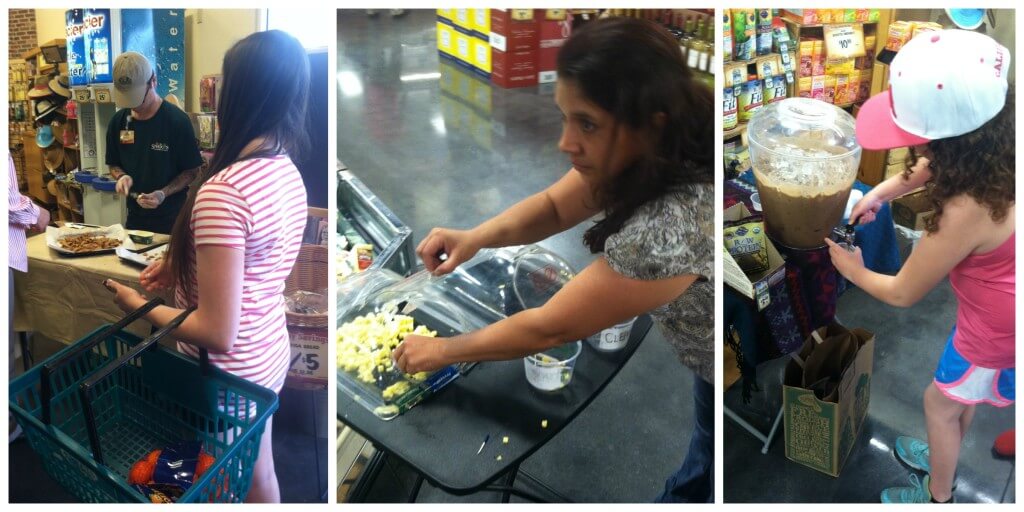 Lucky for us, not one sign said, “only take one”

As we’re walking to the register it was a hallelujah moment… No.. I didn’t find more samples… I saw this scrumptious pre-made hot whole roasted chicken. Oh yeah baby! Those frozen burritos went right back in the freezer. We grabbed some microwave mashed potatoes & gravy and even had enough for some fruit. I figured since I had the gift card, I could “splurge” a little so we were able to each have half a dinner roll. I felt like we were rolling in dough so with the minimal cash I had left, so we went to the dollar store for something to drink. ha  Oh and I even had enough $ for plates and utensils from the dollar store.  As I walked around the dollar store, I looked in their freezer section and I saw a piece of heaven. If you guessed  microwave corn on the cob & rosemary flavored roasted potatoes, you guessed correctly. Woot Woot! I was super thrilled knowing these kids were gonna eat well that night.  It was like Thanksgiving came early… well with a chicken instead of turkey. YAHOO! 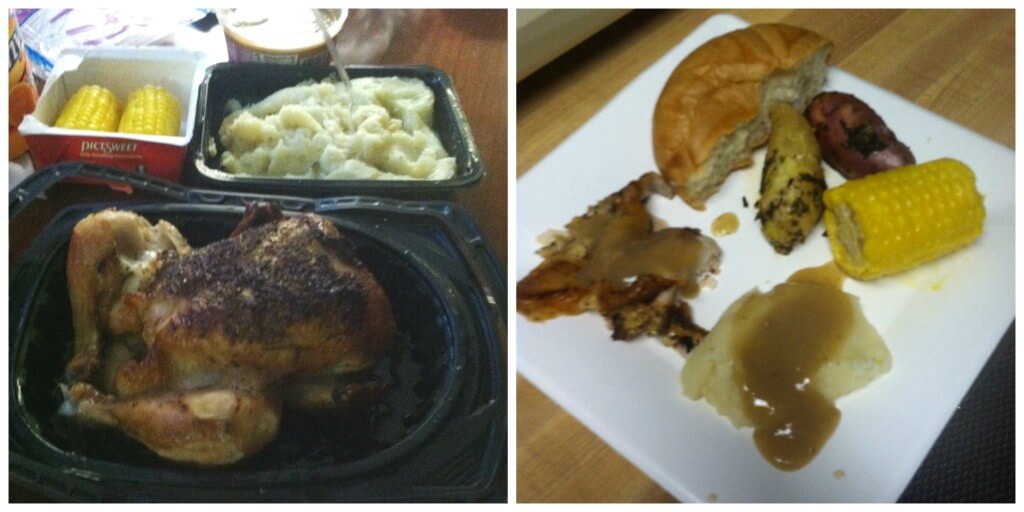 The  kids were ever so grateful at the awesome dinner they had. Success!!!!

Oh and of course dinner wasn’t that easy…. because the potatoes were super hot that I dropped them. But luckily some of the potatoes stayed in the tray. Although, knowing me… I may have still eaten them if they all had fallen. Gross… but true. I figure, desperate times calls for desperate measures. 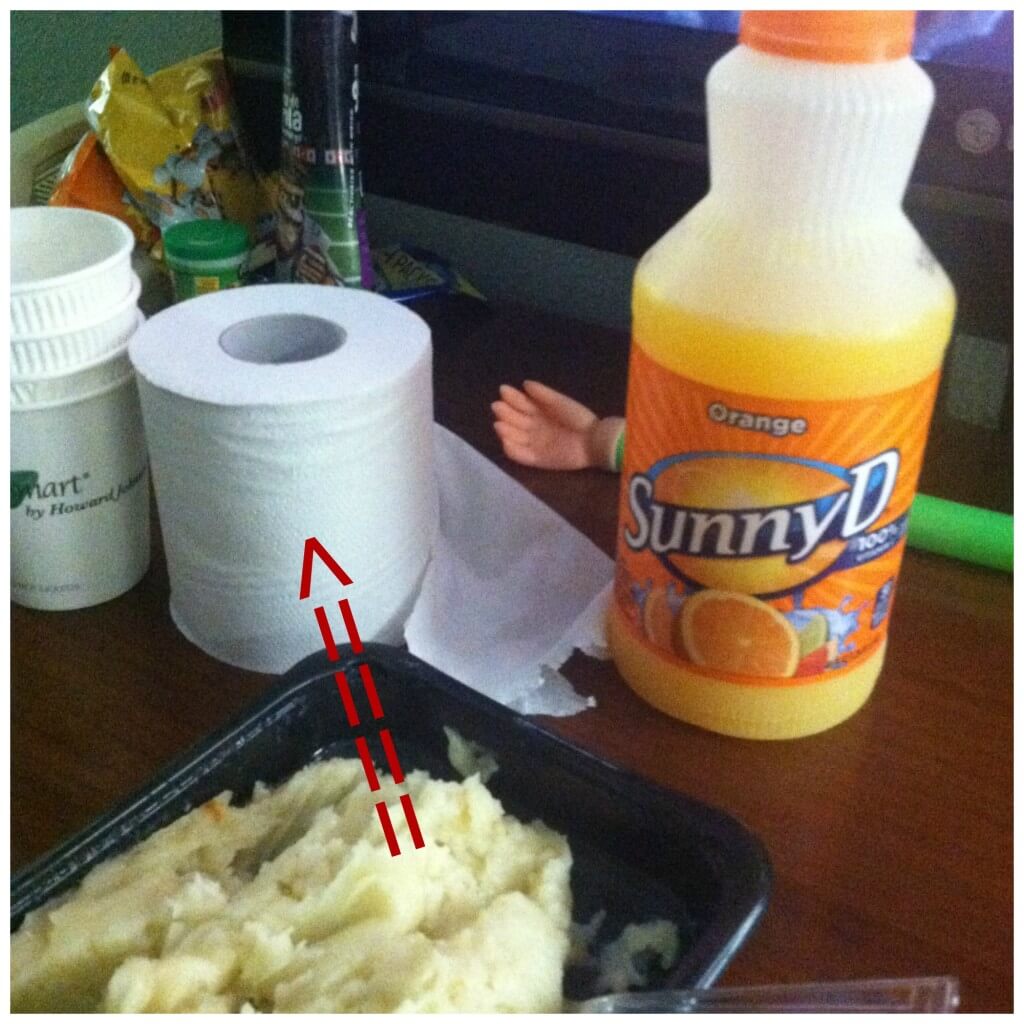 All was well…. and wouldn’t you know it… we made it through the end of Monday with $3.00 left over.  *prayer answered* . The rest of the night consisted of mapping out where and what we’d eat for the next day.

What is something you have done to be frugal … or cheap?