Chocolate or Poop: When in doubt… go with poop!

If you’ve been around children, you most likely have heard the saying, “Chocolate or poop” once or twice. It had been 5 years since the last time I dealt with the dilemma of what “IT” was. You can read about the funny (or gross) Chocolate or Poop story here .

Today a student told me that someone wrote on the bathroom wall with poop. My first thought was, WHAT IN THE WORLD? There is no stinking way that a student would do such a thing. So my thoughts were that it was most likely a student playing a prank and smeared chocolate on the wall.  When I went to the bathroom stall to check out the supposed poop on wall (chocolate in my mind), I looked at it. Examined it (with my eyes) and it actually didn’t look like poop. What a relief!.. So I thought.

So…. What does someone as smart as I am do? Instead of taking the kids word for it, as she was probably telling me from her own “chocolate or poop experience. I decided to touch it to check if it was actually chocolate. Yeah I know… what the heck was I thinking?  Then I quickly remembered my personal experience with my daughter of “Chocolate or poop“. Well…. I I was smart enough to not take the chance that it was actually poop. So I didn’t touch it. YAY for thinking! So instead, I did the 2nd best thing and decided NOT to lick it but I sniffed it instead. After all, in my mind… it was chocolate. What the curse word was I thinking?!!!! I took the deepest breath I could take and sniffed away still thinking it was chocolate. You know, maybe fudge with a hint of cinnamon. I don’t like chocolate but I do like the smell of it. Well… Holy heck!!!! I just about vomited. I could not get the stench out of my nose. It felt like the more I would breath, the more I smelled poop. Man! Your own poop smells as it is, but to smell someone else’s poop… Yeah, beyond Eeew! My eyes were watery. I was weak. I kept gagging. Although I was upset at myself for smelling the darn thing, I was laughing at my stupidity. 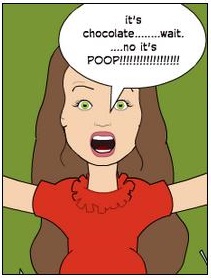 As a friend once said…. It’s not OMG… it’s OME… meaning, “Oh My Edna”. I guess that’s the thing to say when someone does something stupid. ha.  Anyhow, I washed my face but I couldn’t get the stench to go away. So what would you do to get the smell to go away?  Maybe smell coffee beans or something sweet and nice? Yeah, that’ s what a sane person would do. (actually, a sane person would have never smelled the poop in the first place. ha!) But not me…. I decided to put sanitizer in my nostrils.  I’ll tell ya what… it did the job because I didn’t smell like poop any longer… however, my eyes still watered but this time it was due to the stinging of the sanitizer.   Of course a kid then walks in my classroom and asked why I was crying. Hahaha… Oh dear! “Because of your poor decisions” is what I said, but really was talking about myself.