Creating memories while dining together

Last week was Take Your Child to Work day. Did you take your child with you? I did not have that privilege, but I did spend the day with my beautiful but goofy daughter.  So as many already know, I am not one to cook often, so I was beyond thrilled when I found out that Olive Garden offered Kids Eat Free on Take Your Child to Work day.  We waited in anticipation to go out to dinner that night. Well, have you ever had that moment where something off the wall happened and you missed your chance due to a silly misfortune or just plain poor timing? Well that happened to me on that particular day and we sadly weren’t able to participate on that day.  Both my daughter and I had been pretty much been salivating all day in anticipation of eating dinner at Olive Garden, so we couldn’t be left with our tongues hanging out like hungry savages, so we ended up going the following day.  My youngest daughter and I were on our way to Olive Garden when she reminded me that her sister would be upset if we didn’t invite her. So of course, my eldest daughter and her husband met us at Olive Garden. 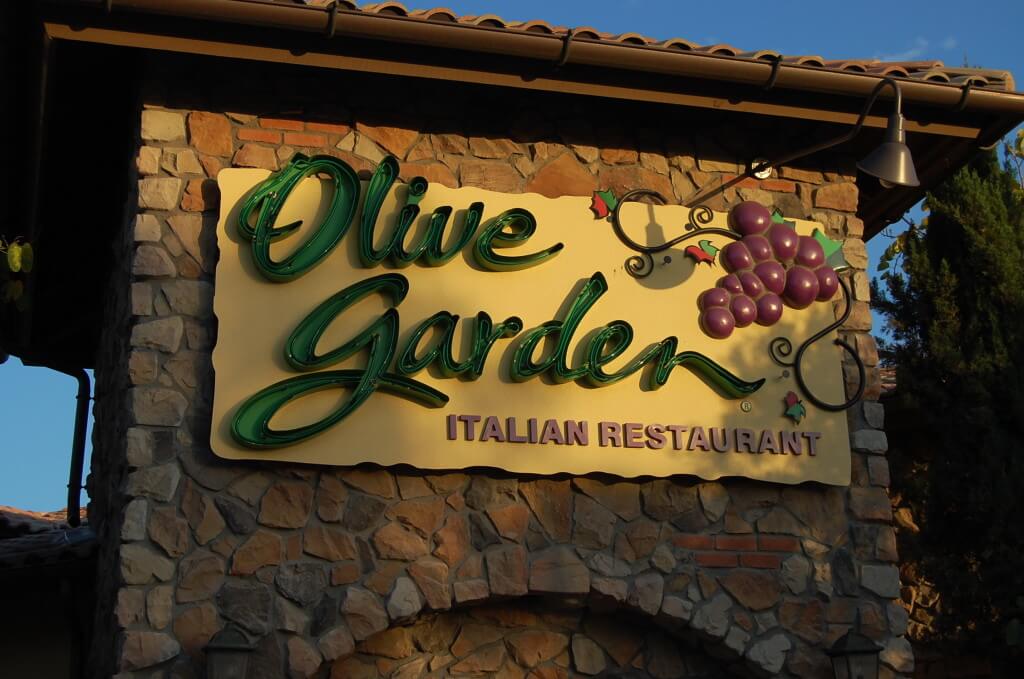 Olive Garden is the place to eat

Have you been to Olive Garden lately? If so, can you just picture their scrumptious Famous House Salad? Oh la la! It’s beyond delicious. I could eat that salad non-stop, so thankfully it’s a bottomless salad because I sure ate more than my share.  Even my 10-year-old likes their salad; however, we ‘fight’ over who called dibs first on the pepperoncini’s.  I of course always win; however, as any mother would do, we still allow our children to eat what’s there even if we really want it.  As silly as this may sound, I believe that sometimes it’s those little “sacrifices” that bonds a mother and her child. You know what I’m talking about don’t ya? Like the time you let your child take the last bite of cheese cake even though you so badly wanted it? Yeah, that also happened during our dinner. 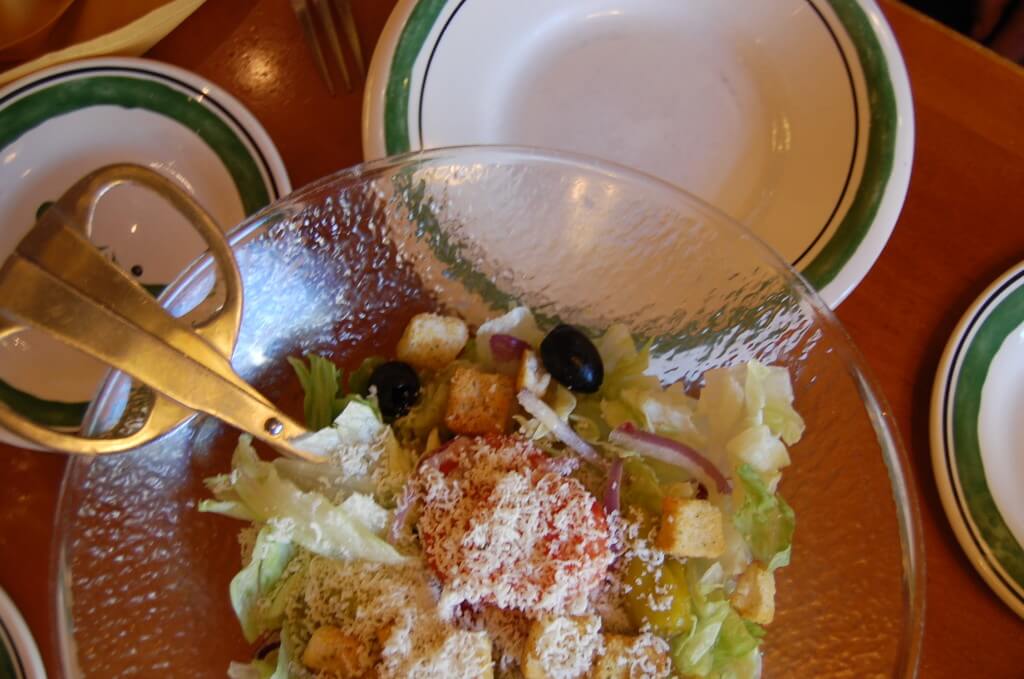 So my oldest daughter ordered a cheese cake as her main course. One would think that’s an odd thing, but I figured she’s pregnant so there was no fighting her craving. Her ordering cheese cake brought back so many memories of when my daughter and I would go out to eat; we would always eat dessert first. It’s interesting the things your grown children remember. I love reminiscing with my kids (ages 10 & 21) about every day happenings.  It always seems to happen when we go out to eat; we literally sit for hours and talk. I kid you not, we once sat at a restaurant for FOUR hours just talking about life, memories, and the good ol’…. “Remember when”.  Ah! The wonderful conversations and memories we create are priceless. It of course wasn’t any different at Olive Garden. We had great conversations about anything you can think of from careers, to schooling, pregnancy, current events, to silly things as well as conversation about who ordered the best food.  You be the judge… Who won the debate on who ordered the best meal? 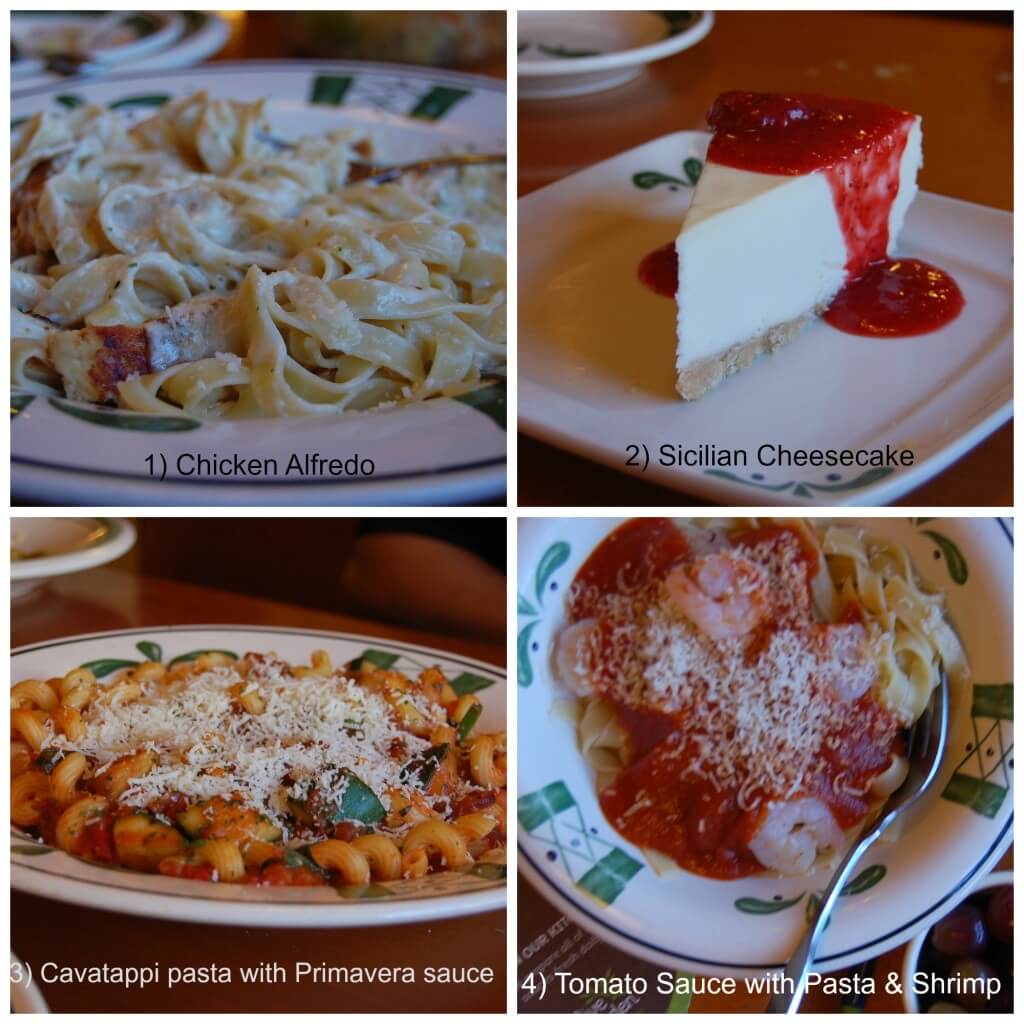 Which meal would you have chosen?

We had many great conversations and a whole lot of laughter throughout dinner. I actually had one of those episodes where you laugh and just can’t stop. We had just gotten done talking about how we were all surprised that one of us hadn’t spilled anything, because it never fails that at least one (if not all) will spill a drink or food on our shirt. Well not 1 minute after that was said, the waiter knocked over a full glass of water on my lap. Ha. First off, let me tell you that Olive Garden has THEE best waterproof napkins. I may have to invest in some of those bad boys!. Luckily I had their napkin on my lap because when that entire cup of water fell on me, the water just slid off the napkin like a slip and slide. I got wet very little thanks to their napkin. Ha!  All four of us at the table burst out in uncontrollable laughter. Our poor waiter was SO worried about his little mishap. No matter how many times I told the waiter that I wasn’t upset and that it was all OK, he was still super panicked and overly apologetic throughout the entire time we were there.  The more he apologized, the more I laughed. Yeah, now that I think of it, maybe it was just me that had the uncontrollable non-stop laughter.  Ha.  My family had a good laugh and now the next time we go out to eat we’ll be able to tell the story of, “remember when the waiter…..” Oh the memories we create while dining together. 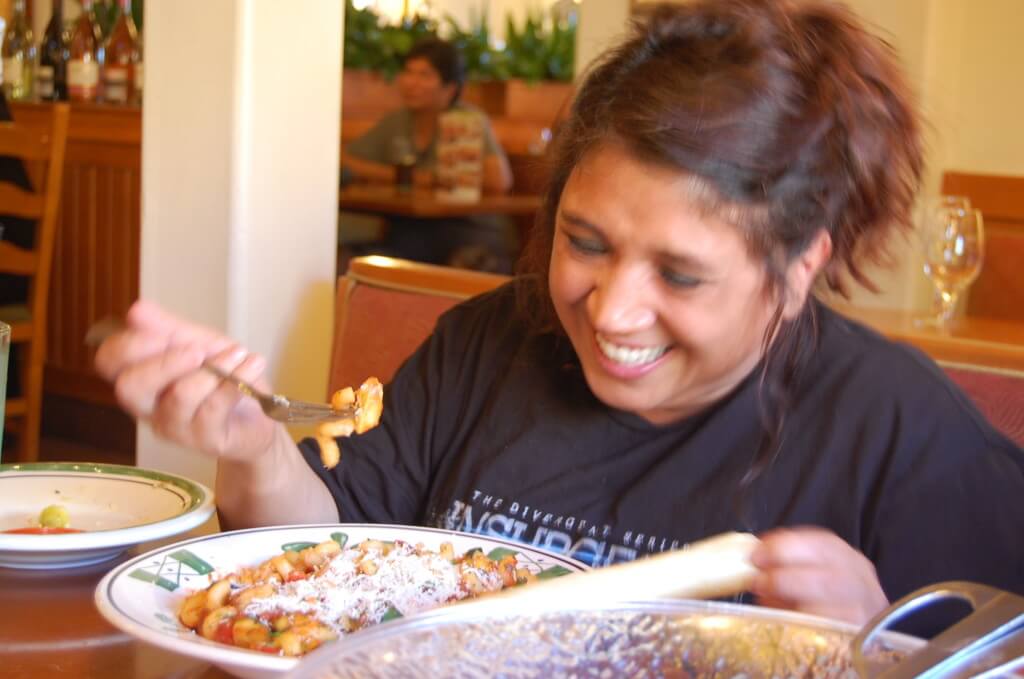 … and the laughing continues

After our dinner plates were picked up, we continued with our conversations and just talked away. I have a bad habit of talking with many hand movements especially when I get excited about something… and wouldn’t you know it…. I knocked over a glass full of water.  ha. Never fails…. Dinner wouldn’t be complete with one of us spilling or breaking something. 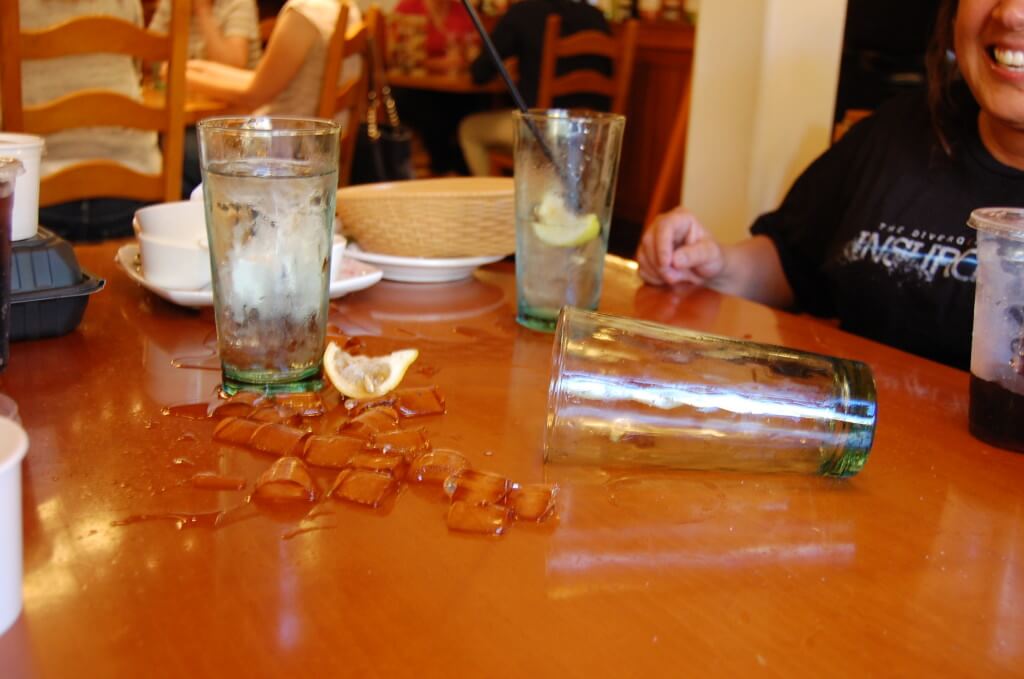 Never fails… oops I did it again!

“I don’t always have a serious face… But when I do, there’s food involved”

… and the yapping never ends….

Disclaimer: I was provided compensation for this post. All opinions listed are 100% my own.