Well Well…. Here’s a topic I know many women (and surprisingly some men) struggle with and can relate to but don’t necessarily talk about it due to the embarrassing nature of it. What am I talking about? Something I deal with on a daily basis. You know, when you have to cross your legs to cough, sneeze, jump, laugh, and so on… Yup! That darn thing that happens after having kids. Oh the life of a parent and the many blessings that come with it….  You guessed it! It’s the “I” word…. INCONTINENCE! I say “I” word because believe it or not, I have a difficult time saying the word incontinence. Not because the word embarrasses me, but because the English Language Learner in me has issues knowing how to say that darn difficult word. Geez, imagine me trying to spell it without copying and pasting it from a dictionary… yeah, not happening. Ha. I actually had to ask my brother-outlaw how to say the “I” word. haha.

I was recently told that many people who have the incontinence issues also have symptoms of clinical depression. Have you heard of such a thing? Not sure how I feel about that. I know many women with incontinence problems and none are depressed. Hmmm… Either way, I found it rather interesting to hear such a thing. I, however, am FAR from feeling any sort of depression due to my incontinence problem.  Heck, as much as it REALLY sucks to deal with incontinence, I find it comical. No it’s not funny that it happens to other people because I do know it’s embarrassing to most and I have seen how it can interfere with certain aspects of your life on a daily basis.  Anyhow, for me, I have to find the funny in everything because life is simply better when you’re laughing.  So as horrible as it sounds, it literally cracks me up when I tinkle. Gross I know, but funny.  Of course it’s not THAT funny when you have to leave work to wash down yonder and change your clothes because you full-out urinated from having a coughing fit or sneezing attack or from the usual with me, non-stop laughing. Ha   Actually, I guess it is funny because I am cracking up laughing at the flashback. Yes, it really has happened to me (more than once) true story!! Curse you incontinence! ha

So I have a rather interesting story about the dreaded incontinence.  I had received samples from Poise  which You can get free samples here as well.

I was so excited to receive my samples in the mail because I really wanted to try out a new product as the one I was using didn’t live up to my expectations. I assumed I would just get the pads, but I was ecstatic when I saw that I also received a sample package of vaginal wipes. I was anxious to use it because if they worked, I would be able to keep the at work so I wouldn’t have to run home to smell fresh when I had my accidents. ha.. The thought of it makes me chuckle.  So at the first sign of incontinence I sprinted to the bathroom, of course tinkling along the way. (TMI.. I know) I cheerfully got the vaginal wipes and wiped away. Yay for being clean and not having that stale urine stench. Gross, I know! I instantly felt a little tingly down yonder and I smiled for a split second then I quickly yelled bloody murder. I wanted to strangle the person that invented those wipes.  I was jumping up and down wishing I had a fire extinguisher because it felt like there was a full-out forest fire down yonder. I was fanning myself and quickly trying to wash away the intense burning feeling. What in the world was happening? How can vaginal wipes feel so uncomfortable and be so unbearable. It tingled down yonder and felt like a breeze of Mentholatum between my legs for a tad over an hour. Once the feeling started to go away, I decided to see what in the world those wipes were made of and wouldn’t you know it… I should have read the package prior to using it on my lady parts. They were not even close to being vaginal wipes… They were Hot Flash Cooling Wipes not intended for intimate areas. AGGHHH!!! So now I know why companies write warning labels on their products because I’m that moron that needs them!  Yes, I was dying of laughter at the idiotic mistake. 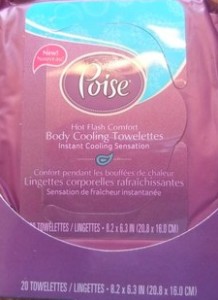 But in all seriousness, I found this interesting list of foods to avoid when suffering-incontinence.  I will say that not drinking caffeine has help a tad.

I guess it’s time to start those difficult to do kegel exercises to help with incontinence… or is it just me that finds them difficult and as a result of doing them incorrect they don’t work . Ha.   FYI… when the Hot Flash towelettes are used correctly, they work wonderful for hot flashes. It feels so refreshing on neck & face.  I give them 2 thumbs up and a twist, however, ONLY when used correctly. Kuddos to #Poise!