Why Did The Chicken Cross The Road?

I was on my merry way when I saw cars slamming their breaks and swerving on the road. What in the world were they driving like crazy people? I get to the stop light and there was a chicken trying to cross the road. That poor chicken kept going in different directions trying to avoid getting hit by a car.  A cop then drove by and also swerved and almost hit another car. CRAZY!!! The funny part was that the cop turned its lights on and came back the “crime scene”. Two cops got out of the car and for a moment I thought, “What? Are they going to arrest the chicken?” ha….. but nope they didn’t. The cops were actually trying to catch the chicken. Even the cops were laughing non stop. I bet that would be fun to write on their resume. Ha!

It was a rather comical police chase that I wish I would have video taped. I did however get to take a quick picture of the chicken while I was stopped in the middle of the road. Anyhow, be careful out there because there is a loose chicken roaming the streets that the police are looking for. 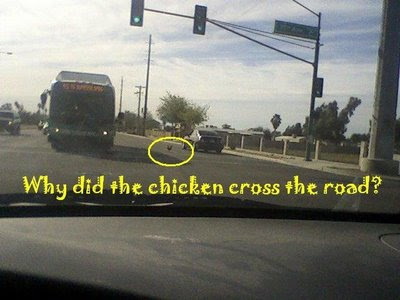 So… Why did the chicken cross the road?