Anyhow, not long ago Jessica’s Dr told me that Jessica “possibly” had Autism Spectrum Disorder. I didn’t do anything about it because I was kind of in denial. However after almost 2 months, I finally decided to get Jessica tested to make sure it was an accurate diagnosis. If she does have it, then I wanted to get her started with early intervention.  It was such a hassle to get any help from the school district that I live in. Of course – no surprise to me. Anyhow, prior to them testing her I needed to enroll her in preschool which I did. Then the district tells me that she couldn’t be enrolled because I made too much money. Good riddance! It seems like one has to be poor or unemployed to qualify for pre-school. UGH!  I asked them where I could take Jessica for an evaluation and they said to ask my DR. Well my doctor had already said to go to the district, so it was a HUGE long mess.

Anyhow, the school finally told me that the only way they would accept her in preschool was if I took them a copy of her medical record saying that she had ASD. So I called the DR to see if they could give me a copy of her record that stated she possibly had ASD. They told me it would be no problem and to go get it. So I went to the the doctors office to get a copy of that paper. When I got there, they told me that I couldn’t get it because the school had to request it. $!#*&! Needles to say, I was irritated at this point because when I called I told them what I needed it for. So I was then told that if I wanted a copy of the record (just one sheet) that I would have to pay for it. Anyhow, to shorten my ranting about the DR visit, they had me wait for thirty minutes before they told me that they would give it to me.

Now what next? After that doctors visit I decided to go to Target to buy my sister in law a birthday gift since we were supposed to be meeting at a restaurant for her birthday. I drove into the Target parking lot and a car came out of a parking spot so I slowed down to let it get out. My intentions were to keep going down the lane cause I’m one of those lazy people that will drive around for EVER trying to find the closest parking spot. Yes…. I admit… I am that lazy!!! Anyhow, after the car came out of the spot, another car came out of the same spot. I wasn’t even expecting two cars to come out of the same parking spot… so I hit that second car. Yup… a wreck in the parking lot! It was minor, no injuries, but enough damage was done that needs to get fixed. So all I could say was “what next”. The lady gets out of her vehicle and I thought she was going to ask if me and my girls were okay, but instead she starts yelling at me telling me to watch where I am driving. Can you believe it! She comes out into a lane of traffic and has the audacity to yell at me! At this point I was thinking, “bring it on lady, cause I have had a bad day you are way close to getting an ear full (or more)” I guarantee she did not want me to go ghetto South Phoenix crazy on her!!!  So she continues to yell at me saying that I was in her way of parking! Are you *%$!* kidding me. Look at the picture… is it not obvious that she missed the parking spot by several feet? I am in the driving lane and supposedly she is “parking” YEAH RIGHT! No, she wasn’t parking in reverse, she came in from the parking spot behind. What she really was doing was cutting through the parking lot and since she saw the other car come through, she must have assumed that the coast was clear. So I will skip all the small details (which are juicy) and make a super duper long story only longer.. hee hee, I mean short. Of course since it’s a parking lot, police can’t make a report which REALLY sucks for me cause it wasn’t my fault. I did however call the police because there was no way that psycho chick and I were going to calmly exchange information. When the cop got there he did say he couldn’t do a report. However, he did tell that chick that it was her fault. She started yelling at the cop saying that it wasn’t her fault and that he couldn’t even say that cause he wasn’t even there. Ha ha… well she was) She asked that same question twice and the cop must have been stunned cause he didn’t answer. So the second time I said, “well, the process for an appeal would be IF your insurance refuses to pay every single penny, I will take you to court and when they tell you that it was your fault and you have to pay.. THEN you can appeal it” She didn’t like my response and said, “FINE, I will appeal it!” ha ha. 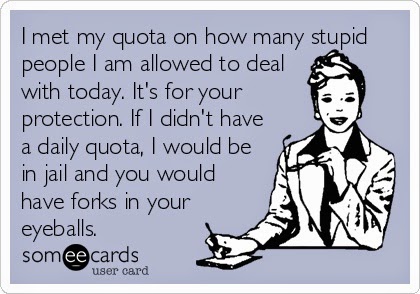 Anyhow, I will spare you the rest of the details. One last thing, I took pictures with my cell phone and she was so upset and kept telling me to stop taking pictures because she didn’t have my permission. Even though I knew that I had every right to take pictures I just said, “I am only taking pictures of the damage on my car and your vehicle happens to be kissing mine”. Once again, she didn’t like my sarcastic remark… Go figure! ha. Needless to say, I didn’t get my sister in law her birthday present but I did blame her for my little wreck because if it wasn’t for her I would not have been in the Target parking lot.Heehee. So I spent literally over one hour talking to both insurance companies… how exhausting!

What a moron she was! I don’t understand people that argue with cops…. disrespectful IDIOTS! Then she asks the cop where she can appeal that decision. HA HA!!! The cop and I looked at each other like she was crazy! 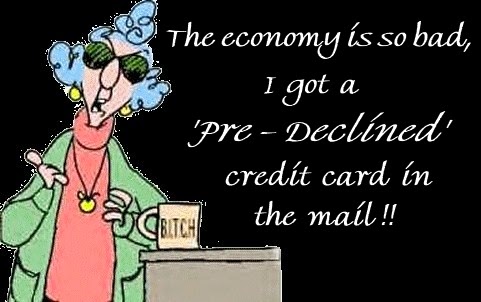 So what next you ask? Well even if you didn’t ask, let me tell you.  I went to put gas in the car and guess what, my new debit card didn’t work. (another long story that I will make super short… a couple weeks ago I accidentally threw my wallet in the trash at KFC to never be found again) I called the bank to figure out the issue with the card and I realized that I never activated it.AGGHHH!! So they give me a number to call to activate it and when I called, they tell me that the number on that card doesn’t exist. WHAT NEXT? I called the bank once again and they asked me where I got that card from because that card number was not in their system. Are you kidding me? I told them that THEY sent it to me and that I had received it the previous day. Anyhow, after a LONG phone call, they finally activated my card.

After all was said and done with the school, doctor, wreck, psycho chick, insurance claims phone calls (another long story), bank card… I finally met up with all of the family at Guadalajada resturant for my sister in laws birthday fiesta. I was one hour late because of the fun day I had. At least that day ended on a good note.. Yummy Mexican food!

« Perseverance Pays Off!!! » Sleepovers are obviously better when they aren’t at my home!