So I leave mi casa in the morning nice and tidy… okay, FINE! Maybe just nice. I go about my day at school. Come home to find mi casa had been invaded by flies.  I don’t mind one bit if you’re going to invade my home, but if you do,  by golly gee George, you better darn well clean it! Heck, I’ll even leave the door unlocked for you if I know you’re coming!

Any whoodles, garbage is empty & surprisingly dishes are clean so I can’t figure out where they heck they are coming from. I bought a fly swatter and murdered the little suckers. It grosses me out because I can totally sense invisible poop everywhere they land. ha ha.

The next morning I woke up to find even MORE flies. What the heck???!!!!  Did they resurrect or did some hatch out of the invisible poop? So I decided to buy a fly trap. I figure that would be the best thing.  So I purchased that fly glue trap thingy and happily was going to put them up in several places. 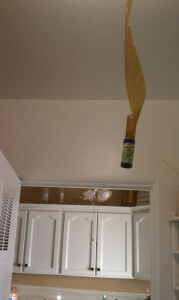 I had to stand on the kitchen counter to hang those sticky, slimy, grotesque thingamajiggers. After having issues trying to hang them, I susuccessfully put the first one up. It’s a lot more difficult than it seems especially when you buy the glue traps from the dollar store. Those suckers kept breaking. Grrr..  Anyhow, as I was putting up the 2nd trap I dropped it and had to jump off the kitchen counter to get it. Sounds simple enough right? Nope… it wasn’t. It turns out that the fly’s had a plan and somehow they pushed the glue trap so that it would swing and land in my hair. UGH!!! GROSS!!!! YUCK!!! I freaked out.

I was able to pull most of it off. OUCH! It hurt because I had to pull out a lot of my hair and finally decided to get scissors to pull the rest off. My hair was so disgustingly sticky. PUKENESS!  For a second I thought I should take a picture of it in my hair, because although gross… I admit it was rather comical, but since I was in complete disgust, I showered instead.