So I remember way back in the day when I was in high school. The football games were one of the many great times I had in High School.  It was a time to hang out with friends outside of the classroom and just be crazy and cheer for our very popular football team.  (We were the best in the district) It was so much fun just sitting in the bleachers talking to friends and cheering with the pep squad.  Then even more excitement came when it was homecoming, which was like the Superbowl of the NFL.  After the homecoming game was the big dance!!! It was just fun to go from the game straight to the dance.  It was a very casual and a fun atmosphere.  Now… things have changed… not sure if it’s better or worse… maybe a little of both.

Nowadays.. kids have to find a date to go with.  They need to go get all fancied up and buy semi to formal wear. It’s really insane.  Tickets to get into the homecoming dance, depending on the school, can cost up to $30 or so dollars per person.  I personally think it’s a rip off… especially if the dance is at the school.  Some schools rent out a hall for these kids to go to. I’ve even seen kids show up in limos. Ballers! It’s a homecoming dance! The school even hires a professional photographer so the kids can spend even more money.  What are they thinking? It’s not like it’s prom! Anyhow, in my opinion,  it’s all a way to make $$$.  I really don’t know why I’m ranting about it because Ande paid for everything with her babysitting money. Kuddos to her! Sheesh! I feel better now that I have vented! Anyhow, Ande went to homecoming last weekend. She was going to go alone but during her lunch time she complained that all of her friends had dates but her. Some sweet little kid told Ande to be his date.  She thought he was joking so she said yes. It turned out that he was being serious which really bummed her out. hahahaha!  So since she didn’t want to be mean, she went with him. I found it rather comical because she came home every day complaining that she was going to homecoming with some guy that she doesn’t like to talk to let alone hang out with. (yes, this makes me chuckle) Ande is texting 24/7 so when she told me that she won’t even text him; I knew she really didn’t like him. ha ha.  But she said she just couldn’t see herself being mean to him. Way to be mature Ande! 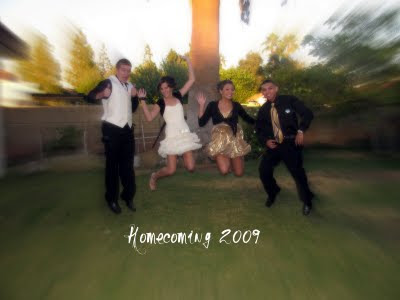 So eight of the 16 kids that she w ent with met at her friend’s home. They took pictures and then met up with the rest of her friends at some Italian restaurant.  How fun that must have been! Anyhow, Ande came home after her homecoming dance and told how much fun she had and that she was WAY happy that a few of her friends told her that her Sweet 16 was a lot more fun than the homecoming.