“TRIGGER WARNING”:  This is a serious post with very personal information

With the sad news of Robin Williams’ passing, it has triggered so many personal memories that I had tucked away to never be talked about again. So many people have been posting on Social Media about the reality of depression.  I know when you think of me, depression is the last thing you think of because I’m always smiling and laughing. Well, you’re right. I do not suffer from depression…  anymore… But I do cope with it.  I truly am a very happy and outgoing person, however, it wasn’t always the case. 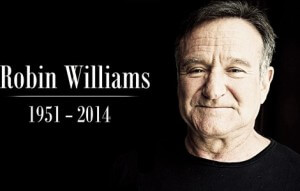 Depression IS real. Depression IS scary.  Depression can take your life IF you allow it to control you.  I am going to share some very personal information and not because I want anyone to feel sorry for me, because I don’t. I’m doing it because people need to understand the severity and how real depression is.  Just because you don’t see it, doesn’t mean it’s not there.

I started suffering from depression MANY years ago. Almost 22 years ago to be exact.  I married a couple of months after I turned 19.  Not one day after I got married, I realized that I made a mistake. I wanted out but there was no way that I would let anyone know what my thoughts were. I wanted out of my marriage but felt like I had nowhere to turn.  At that young age, I seriously believed that in my religion, people didn’t get divorced. Yeah, I was extremely naive. (luckily I’ve grown up now. and I am no longer naive, just gullible. haha)  I tried to fight off the feeling but being in that marriage felt unbearable.  How would I do it? What will my parents think? What will happen to me? So much went though my head. I had plenty of friends and family, but I felt alone mainly because I didn’t want to talk to anyone about my depression. I honestly can’t tell you if it’s because I was in denial or if because I felt like an inadequate person.  Even though I knew that people cared for me, I NEEDED to hear some tell me that I mattered. 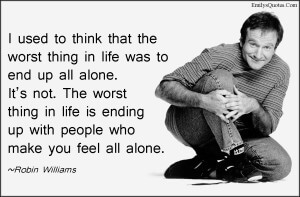 After several months, I finally got the courage to tell him that I wanted a divorce. What happened? Well he said it was my duty as a wife to stay there. (Man, have times changed because now, there is NO way in hell that I would ever sit there and not act on things. Through trials & past experiences,  I learned to wear my big girl panties. haha)

Anyhow, a week passed by and I was still there. I still hadn’t told my parents or friends. I was working nights and this particular night I got home about 2 AM to find him waiting for me. That was the night I was raped by my husband. Yes, there is such thing as rape in marriage. I found that out after the fact through counseling.

Fast forward 2 months. I found out I was pregnant. Sadly at that time, I was devastated about it.  How could I walk out of a marriage now?  I had never been depressed in my life. I didn’t know what it was. I just knew that I was numb to my surroundings.   I couldn’t stop crying. I hated life. I hated me. I hated where I was. I wanted out and didn’t know how. I wasn’t thinking straight. I felt as if there were no hope for me. I felt like I was suffocating. The thought of ending my life was the only way out. That thought of suicide kept going through my head. I hated that  feeling. I hated that I once was a happy person and felt as if that would never happen again. I hated life! I was numb.

What happened to me 22 years ago was a day I thought would never come up again. With all the talk all over social media about the death of Robin Williams, vivid memories of that day keep coming up.  Memories that I thought were long gone have resurfaced. Memories I never wanted to think about again. That day 22 years ago, I sat in my house alone. I was screaming and throwing things. I kept arguing with myself on how to commit suicide. I then remembered that my husband kept a gun under the mattress. I sat on the bed and cried for a long time. I trembled with anger and hatred. I hated ME! I hated HIM! I hated LIFE! I held the gun to my head as I screamed. Then the phone rang. I yelled at the phone because it wouldn’t stop ringing. It rang and rang and continued to ring. I’m yelling at the top of my lungs, “SHUT UP! SHUT UP!! SHUT UP!!!!!  I cocked the gun. I’m crying even more. “I HATE YOU! I HATE YOU! I HATE YOU” is what was coming out of my mouth. The feeling of being worthless was intense. The phone seemed to ring louder. I yelled louder. I was going crazy and wanted out of what I thought was pure misery. The phone kept ringing non-stop. Then I heard a small voice in my head say, “Edna, don’t pull the trigger… answer the phone”  I got upset that I ‘heard’ that. And I cried and trembled as the gun was to my head.  The phone is still ringing. And again, I hear that same still small voice… “”Edna, don’t pull the trigger… answer the phone”.  I don’t know what made me stop, but I trembling and reluctantly answered the phone…. It was my mom and all she said was, “Edna, I don’t know what’s going on, but whatever it is, don’t do it. I am on my way to your house“. She lived about 25 minutes away.  I literally fell to the floor and cried non-stop until my mom got there. I vividly remember that horrific day. I cried on my moms shoulders. I never told her what she stopped me from doing. I just cried and told her I needed out of that marriage. I then went through a VERY messy divorce that lasted 2 1/2 years. It kind of makes me chuckle that the divorce battle took that long and we were only married for 10 months. ha  However, those 10 months felt like an eternity in hell. I went to counseling and was put on anti-depressants.. Or happy pills as I started calling them.

Fast Forward to when my daughter was about 4 years old. She went through so much torture and abuse with the step-mother and father.  If you’ve ever read the book, “A Child Called It”  well, my daughter suffered similar things like the boy in that book. (Luckily, not to the point of close to physical death like he did… but emotional death.. absolutely!)   Anyhow, due to the custody battle and he having the means to have a good attorney, it was difficult to keep my daughter from going with him for visitation knowing she was getting abused. I started to get depressed again. However, this time I knew the symptoms of depression and by that time, I was more outspoken and was able to get help really quick. I once again started taking the anti-depressants. This time I had someone to live for. It wasn’t just me. I had MY daughter that needed me because she was dealing with depression herself and at the age of 5, I had to call a suicide prevention line to help HER. To hear a 5-year-old talk about a thought out plan to kill herself was devastating. I vowed to never allow depression to control me again. I needed to be there emotionally for my daughter.

Now Fast Forward a Long story short… or I guess I should say, Longer story not as long, ha… His parental rights were finally taken away forever. BEST DAY OF MY LIFE!!!  From that moment, I decided life was grand. I decided to wean myself off the anti-depressants and through counseling I learned to cope with dealing with depression. I no longer allowed depression to control me.

It is now 22 years later after my first bout with depression. I truly can’t tell you that I have beat my battle with depression because in reality, I haven’t, BUT I can tell you that through help I HAVE learned to cope with it.  I HAVE for sure learned to control depression so that it doesn’t control me. I HAVE learned to stop it before it affects me.  I’m not saying it’s easy and that anyone can do it, but I am saying that THERE IS HOPE for YOU!  I won’t lie, it was RIDICULOUSLY difficult and I had to go through counseling for the necessary guidance. It is possible to live a happy life while coping with depression. I AM LIVING PROOF!  I’m not saying I don’t ever get down in the dumps, because I do, but it’s not often at all and I NEVER allow the sadness or depression to take over my body and thoughts. 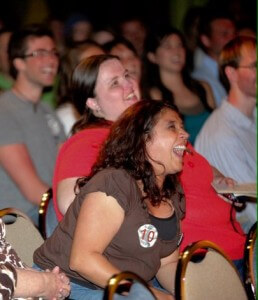 This is me laughing till my gut hurt at Jester’Z Improv Comedy.   Laughter IS the best medicine and wonderful therapy! {life is better when you’re laughing}

Besides laughter, being very outspoken about things that may trigger depression has been a great help for me. Talking about things that happen in my life has been very therapeutic, which is the main reason for this post.   Robbin Williams suicide was a HUGE trigger for me and I will not allow things to stay bottled up because from past experience, I know that I would fall into a deep depression… and ain’t nobody got time for that! ha.  I have learned to love life. Life is beautiful. Life is Grand. Life is laughter. I owe my life to my mom because if it weren’t for her, I would not have what I have now…. A wonderful life with beautiful daughters in my life to make it complete. 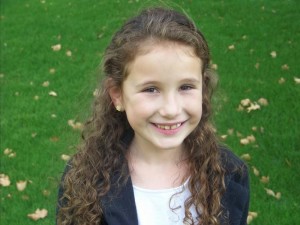 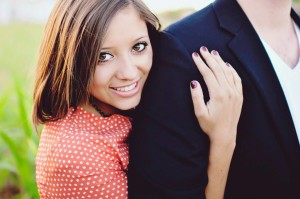 Some of the MANY signs of depression are:

There are so many other symptoms, but those are some symptoms that I was experiencing. Depression IS real.  If you or anyone you know are having symptoms of depression, PLEASE get help asap! Here is the Suicide Prevention Lifeline.  There IS hope.  There IS a light at the end of the tunnel. Remember… You do Matter!

How have you or anyone you known dealt with depression? How did you or they cope with it?

« Finding success as a single parent » Touring Through Blogland