Do you eat microwave dinners? Well I am on the run a lot, not like on the run from the police but I always have something to do. Yes I will say with out one bit of shame that I eat microwave dinners more often than I should admit to. ha  Being a single parent with one child at home, it sometimes is just cheaper to eat that way especially since she’s SO darn picky but I have no one to blame but myself.  Oh and of course it’s also easier to pop something in the microwave than to cook. (Call me lazy or busy… I’ll accept both)

Let me tell you about the time I was in the teacher’s lounge at school. It had been a very long and busy morning. Teachers only get a 30 minute lunch break so I was anxious to hurry and eat my lunch.  As the Healthy Choice Baked Lasagna with Meat Sauce was put in the microwave, I started talking to a co-worker. I glanced at the microwave because I thought I saw it flicker. I kept talking to my co-worker and then within 1 minute or so of the a Healthy Choice Lasagna being in the microwave I did another double take because I thought I saw something flicker in the microwave again. I then jumped up out of my seat and yelled, “FIRE!! HOLY CRAP! THERE’S A FIRE”.  I saw flames so I sprinted on over to the rescue, unfortunately I wasn’t wearing my super hero cape and as a result was not able to salvage the food or keep the smoke from spreading through out the teacher’s lounge.  It was amazing how much smoke the small portion of the burnt tray caused. 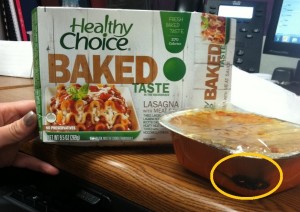 My co-worker freaked out a tad (let’s be honest, she was pretty much in the fetal position sucking her thumb and crying a tad while having a having a panic attack) but I’m guessing her reaction was more to my possible over reaction of the fire. ha.  After I put out the microwave fire there was smoke everywhere in the teacher’s lounge. I know it’s not a funny thing but I couldn’t stop laughing at the one co-worker that was freaking out as well as seeing several co-workers and myself fanning the lunch room like crazy women so the fire alarm wouldn’t go off. (Flashback useless s ide note: Since I was one of the teachers that was to clear the 5th & 6th grade hall when there’s a fire, I made sure to tell those students that if I ever died in a fire at school to make sure to tell the news that I was a hero and died saving them. ha.)

Anyhow, although I laughed at the situation, I was a tad annoyed that the majority of my lunch period was used to put out a fire and keep the fire alarm from going off. So needless to say I was a tad angry and I was obviously still hungry. Yes, you could say I was hangry! (a state of anger caused by lack of food) 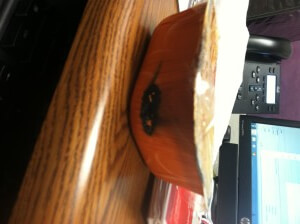 So after doing a little research as to what caused the fire. The culprit was the foil on the microwave dinner tray.  YUP! Foil. I was flabbergasted as to why in the world a company would use a tray with a foil lining for microwave foods. It simply makes absolutely no sense. I contacted the company Congra Foods letting them know of the situation and to ask why they used foil trays and why it has happened to others and hasn’t been dealt with. 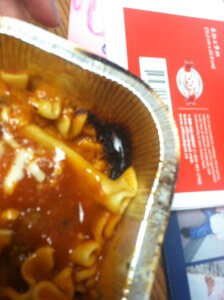 I was rather impressed at how quickly someone got back to me. I was told that they were aware of the situation of the foil causing a fire and that they were working on it. I was told they use a certain type of foil that is meant to be used in microwaves. They apologized profusely and offered to pay for the microwave. WOW! I was very impressed. They also sent me some coupons for  more microwave dinners.  I’ll be honest, I was afraid to buy Healthy Choice Meals because I didn’t want that incident to happen again.  I did however buy their Claim Jumper & Marie Callender meals which surprisingly have a decent portion (One microwave lasagna was enough to feed both my daughter and I.) 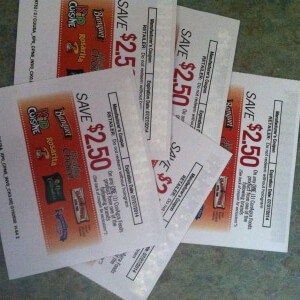 Have you had issues with microwave food? What’s your favorite microwave meal? Or one to stay away from?