Back to School… Watch out!

My summer break is coming to an end. I start school this week and the thought of going back is bitter-sweet.  It’s bitter because I will not see my daughter on a daily basis anymore since I have transferred to another school within the district.  I will miss our eating lunch together.  I will miss the excitement in her face when she sees me. Of course, this excitement only happens at school. ha  She would walk down the hall with her class, and if she saw me in the hall, her face would light up and she would either give me a high-five or a hug (depending on if her teacher was watching). Can you imagine she being sent to detention for getting out of line to hug her mom. That would be bad considering I am the Behavior Interventionist or in other words, detention & In School Suspension teacher.

The excitement of going back to school is something that I believe most, if not all, teachers go through every year.  Your mind doesn’t have a shut-off valve the week before school starts because you’re thinking of school. You are anxious, excited, nervous all at once. You pretty much have the 1st day jitters (It’s a great book to read to students on the 1st day) 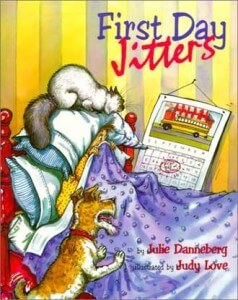 TEACHERS: Here’s a lesson plan for this book.

You worry about lesson plans, your classroom being set up, which kids you will have, will you be able to accommodate all of their learning styles, will they like you. ha.  The first day of school can be both fun & nerve-wracking. But it is definitely a wonderful thing to see those smiling & sometimes nervous faces on the first day of school.  As I was getting things together for my new school, many “what if’s” went through my head.  However, my biggest “what if” was, “What if I do something ridiculous and these new parents aren’t as forgiving as my last school”.

Let me tell you a little about me that many may already have figured out. I AM A KLUTZ! I am Clumsy! I am Accident Prone! I sometimes do and say things before thinking first. Even though others think it’s funny I sometimes just want to crawl up in a ball and punch myself in the head for being so goofy. ha. Sometimes I say things that literally even crack me up due to it being so ridiculous.  You know, to the point of laughing hysterically and peeing your pants or snorting non-stop.  Now imagine me, goofy, laughing all the time, while portraying the tough Behavior Interventionist.  Yes, I laugh at that as well.  When I started in this position 4 years ago, it was difficult for me to keep a straight face when I disciplined someone for something I found a tad comical.  But I will say that I have become a pro and covering up the funny and pretending to be the tough teacher kids think I am. ha. One of the MANY things students have said to me that made me chuckle inside was an 8th grader telling me that my voice scared him. hahaha. (I should have yelled… “BOO” when he said that. ha) Or a student  telling me there was a rumor going around school that I was the meanest teacher at school. My response, (obviously in a tough voice) “You make sure to tell them that it’s not a rumor, it’s the truth”  I don’t like being tough but I see it as acting. And acting is fun, therefore, I have a lot of fun at school.  Gosh I love my job!!

Anyhow, last school year I was in a meeting with several teachers, the school psychologist and a parent.  After about 20 minutes into the serious meeting, the school psychologist looks at me and her eyes get real big and then she shook her head and looked again. This time she had that look like you see when cartoon characters have their eyes popping out of the socket after seeing something unbelievable.

She tries to silently tell me something but I didn’t understand. She must have not known I never went to school to study lip-reading. ha. The parent looks at the psychologist then looks at me. The parent chuckles, I chuckle, everyone chuckles. I still don’t know what’s going on. I just found it amusing that everyone was chuckling.  Once the school psychologist explained what was happening, everyone was in full-out loud laughter. Some were literally crying from the laughter, others tinkled a little from laughing (may or may not have been me), there was snorting & holding of the belly from so much laughter. Can you figure it out by looking at the picture what we were all laughing at?

Disclaimer… the picture was a reenactment of an actual event

I wish I had the opportunity to explain to the parent why I had a $1 dollar bill in my cleavage.  There was just so much laughter that no one was able to get a word out. Oh and to top it off, in the midst of all the loud laughter, the parent says, “debe haber tenido una buena noche” (You must have had a good night) Then a teacher says, “can I have my change”.  Needless to say, we were not able to finish the meeting. ha. I kid you not, for the rest of the school year, every time that parent saw me, she would start laughing.

So why did I have a $1 dollar bill down my shirt? Well I was taking my time getting ready for school when I get a phone call from a Sped Teacher asking if I could go in that moment to help translate a meeting.  I now was rushing and didn’t want to take an extra trip to my car so I stuffed everything I needed down my shirt. During each red light I pulled those things out. …. well I obviously missed that last dollar bill. OH MY!